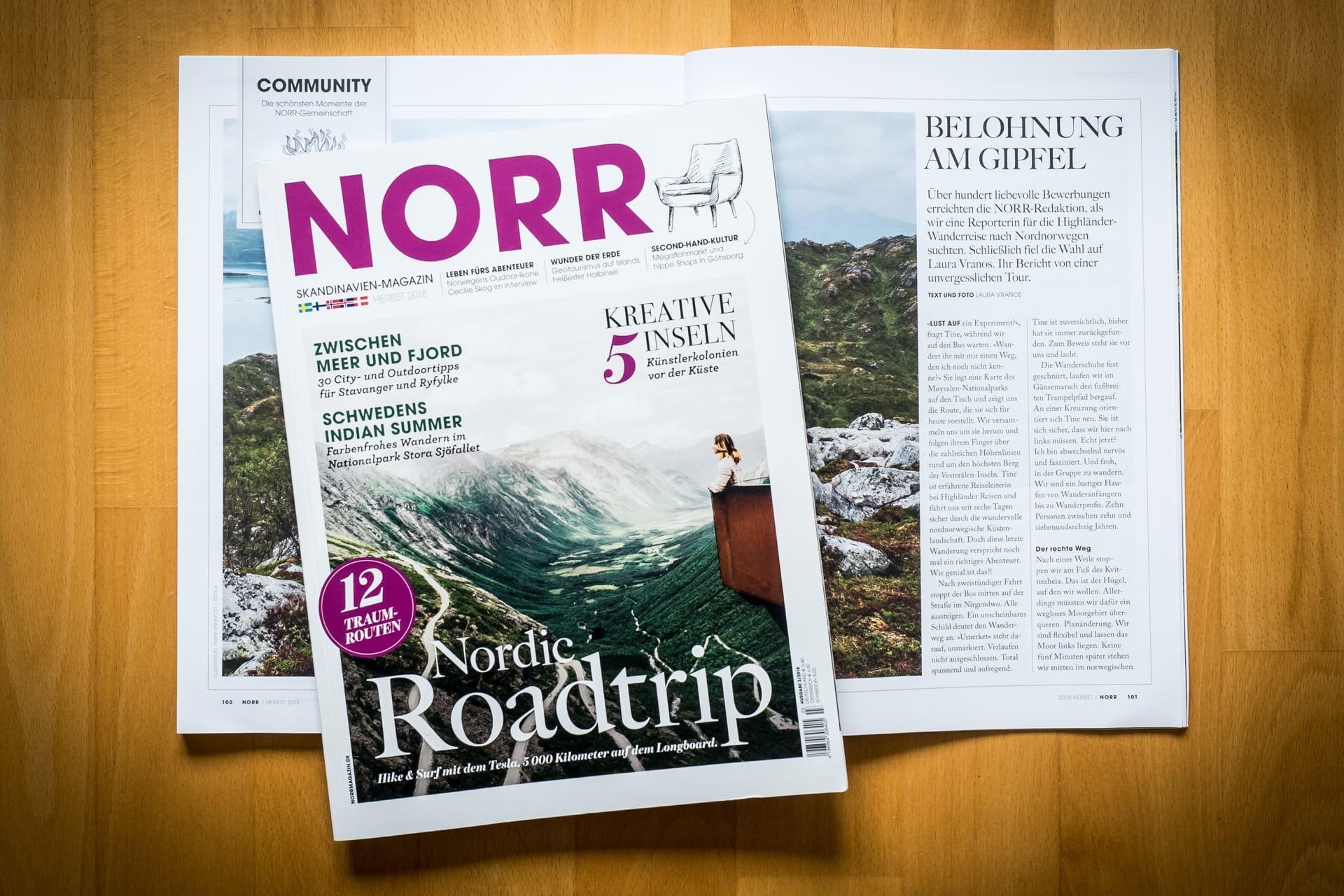 On the 20th of March I received a message from my best friend. She sent me a link with a question “Wouldn’t this be something for you?”. Both the Scandinavien-themed magazine NORR and the travel agency Highländer Reisen were looking for a travel writer for the north of Norway. A week of hiking, taking pictures and after that writing an article about it. That sounded quite nice. But at first, I didn’t do anything. Usually, I don’t have any luck with such things, why on earth should it work now? Besides, would I be able to write an article anyway?

The deadline was at the end of April and the closer it got, the more I was being haunted by the idea to try it. I mean, how should it ever work if I didn’t just try? At the end of April I would be in England, so finally, I took some time a week before that and wrote an application. The selection of my pictures I would sent with the application was the easiest part. The 1000 characters of the motivation letter were something I really invested time in. And by the end of the weekend I had said everything I wanted to within 995 characters, just perfect! When I finally sent the application to NORR I felt good. Slightly optimistic but above all, proud of myself for having tried.

On May 9th I got a message from Norr, that they currently were in the selection process. So there was still a chance. Exactly one week later – I had been at work – another message from NORR popped up. Again a message to say, they needed more time? Or even a negative reply? But then I saw the first line of this email in the preview:

Hei Laura! This day begins with good news: Amongst a…

Wait, what?! Trance-like I opened the mail. I read it as if I had cotton wool in my head. I was gobsmacked: I was chosen! They actually chose me to be their travel writer. “I won” would the wrong term. I mean I applied to that and didn’t just answer a stupid easy question like if Norway was part of Europe or Africa. I really had to restrain myself not to shout with joy in my office. But at least it was lunch time and so I could tell my colleagues about it. Up until then only few had known about my application. And now I could tell the world, which I actually didn’t. Maybe because I couldn’t quite believe it myself.

In two and half months time I would be travelling with a group in the north of Norway, several hundred kilometres above the polar circle. It was funny not having to be concerned with all the hassle that comes with organising a journey. I just had to do what I love most. Maybe that’s why it felt unreal for a really long time. And because of all my work and the extra hours the thought of it faded in to the rear parts of my brain. Up until to that moment when I found myself packing. And driving to Munich from where I took the flight to Norway. Then I realised it… I was quite nervous. But the people I spent the week with were absolutely pleasant and so nice. I felt extremely comfortable. I was sharing the room with our tour guide Tine which worked quite well.

The week had been fantastic. We saw a lot, hiked a lot. And we all enjoyed that the temperatures were less than half as high as they were in Germany at that time. In the evenings, I wrote my thoughts of the day into my travel journal. When everyting works perfectly and is beautiful, than a week always goes by very fast, too fast. But I will keep this in good memory. Had been my first time in Norway but certainly not my last. Writing the article and selecting the pictures took only a fews days, which surprised me a bit. Not as tough as I thought it to be.

Now, almost a month later I hold the magazine in my hand, and there it is, my article… even though they changed it a tiny bit to fit into the magazine. And then there’s my name

Awesome… just awesome! It feels good and I’m proud of myself and grateful for having been given this chance. I’d like to do this more often, seems to be exactly my cup of tea. Let’s see if there will be another chance like this… some time.